What is Krav Maga? 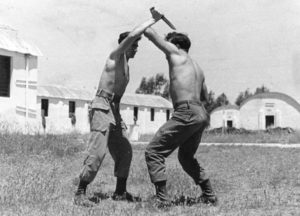 What is Krav Maga?
Krav Maga is an extraordinary self protection system from Israel. Krav Maga was designed to enable ordinary men and women to protect themselves in the shortest time possible. It is not a martial art; it is a fighting system focused on protecting yourself or the people you love. Seventy years of training, field use and evolution have resulted in a methodology that’s simple, intuitive and highly effective.

How is Krav Maga different to Martial Arts?
Krav Maga is focused entirely on simplicity and realism. If it’s complicated or hard to learn, it won’t be taught and it won’t work in the real world. Krav Maga is a field-stripped ‘martial art’ with the sole focus on surviving and escaping. There is a strong emphasis on simple, natural movements, as these are are faster to learn and more effective under stress. Krav Maga values a practical and realistic approach to training. It has no sporting or competitive elements

Where does Krav Maga Come from?
Krav Maga comes from Israel. The system was developed as a simple and effective method of teaching conscripts how to protect themselves should they be captured or loose their weapon. The Krav Maga training proved so successful that it is now used by over 500 military and law enforcement agencies across the world. Krav Maga is the only ‘martial art’ with over 70 years continuous battlefield use and testing.

What Is British Krav Maga?

The British Krav Maga not to be mistaken with a franchise of the same name is mapped off mainstream Israeli Krav Maga . Krav Maga curriculums such as Krav Maga World wide and KMG have already listed out most common self defence situations and documented easy to learn, simple effective solutions to deal with them. The system is sound but there were other instructors that seemed to lack martial arts or hand to hand experience to be effective, The reason being there is a large amount of Krav Maga instructors in the UK with no martial arts exereince and simply got into teach through doing courses ranging from 5 days to 21 days based on Military experience even though (today’s British modern military do next to zero hand to hand) then unleashed on the public.

In 2002 it was around about this time short instructor courses were held in England by official Israeli bodies so as to spread the system though out the UK. During those years there were some practitioners who seemed very clunky and awkward and the system by a lot of Martial arts professionals was labelled Crap Maga as some instructors came straight out of the army with not much hand to hand experience as the requirements for being on a Krav Maga instructor course was either 3 years martial arts experience or an equivalent military or police background. Maybe unknowingly, the Israelis in 2002 certified British military guys who did little or no hand to hand combat. In modern British Military, due to technology hand to hand combat had virtually become obsolete.

The BKMO has the belief that competent martial artists who already have the skills of striking, movement, defence , timing, spatial awareness and have actually been in a fight several times through competition would make a more suitable instructor. It is granted that sport is not real fighting but it is the closest we are going to get without killing each other and surely that has got to be better than nothing. A competitor faces the unknown, goes through fear, adrenalin rushes, blood, spit and tears and that seemed pretty real to Wayne. A competitor has the benefit of losing, going back to the drawing board for new strategies and training which gives them tons of experience to take on new systems and new rules. Even though it is said that Krav Maga has no rules, there is:- Stop the threat, Aggressively combat that threat, break away and scan for the next threat as you make your escape asap.

British Krav Maga breaks down the Krav Maga system, and rather than one man teaching everything we get subject matter experts to assist in the program as Krav Maga is an amalgamation of arts and not a total new system. It is no good having a trainer of instructors telling a group I am not that good at ground work but I will go through what we do or worst trying to wing it. The BKMO utilises subject matter experts to produce a robust British version of the system. One of our instructors is Shaun Lynn who is 5 Time World Self Defence champion and Army weapons specialist who served for 25 years. Another Instructor will be Tony Sykes a fantastic Escrima specialist that helps the instructors recognise reference points. Krav Maga is very big on recognising common reference points so as be effective under stress. The list goes on of individuals we will work with or bring into the organisation. We even have legal self defence experts to help clients keep safe legally.

British Krav Maga has an instructor assessment procedure that is to assess the competency level of candidates, instructors must be proficient to graduate. 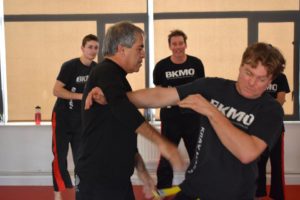 Krav Maga encourages students to avoid confrontation. If this is impossible or unsafe, it promotes finishing a fight as quickly as possible. Attacks are aimed at the most vulnerable parts of the body, and training is not limited to techniques that avoid severe injury. Drills provide maximum safety to students by the use of protective equipment and the use of reasonable force.

Students learn to defend against all variety of attacks and are taught to counter in the quickest and most efficient way.

Ideas in Krav Maga include:

Training can also cover situational awareness to develop an understanding of one’s surroundings, learning to understand the psychology of a street confrontation, and identifying potential threats before an attack occurs. It may also cover ways to deal with physical and verbal methods to avoid violence whenever possible. 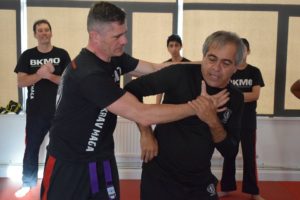